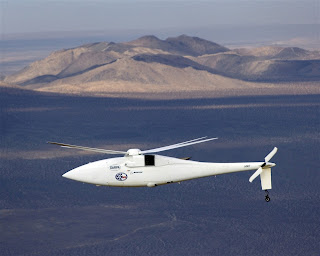 VICTORVILLE, Calif., Dec. 18, 2008 -- Boeing [NYSE: BA] today announced that its A160 Turbine (A160T) Hummingbird unmanned rotorcraft has achieved two key milestones: using its two-speed transmission to change gears in flight, and passing the 100-flight-hour threshold.
"Being able to shift gears in flight is the final significant step in realizing the full potential of our optimum speed rotor technology, which enables game-changing capability for the warfighter," said John Groenenboom, A160T program manager for Boeing. "It allows us to significantly expand the flight envelope at higher gross weights and at higher speeds, while maintaining the A160T's world-record-setting endurance. We now have an unmanned air system with the performance of a fixed wing and the precision and versatility of a rotorcraft."
Breaking the 100-flight-hour mark shows how much the A160T has matured since its first flight in June 2007. That first 12-minute flight set the stage for multiple endurance flights, including an 18.7-hour world record, flights carrying multiple payloads of up to 1,000 pounds, a hover-out-of-ground-effect flight at 20,000 feet, and flights with the FORESTER foliage-penetrating radar antenna. The A160T's predecessor, the gasoline-powered A160, made its first flight in 2002 and accumulated 63 flight hours.
The gear-change flight took place on Nov. 25 and the 100-flight-hour mark was surpassed on Nov. 20. Boeing conducted each flight at the A160T test facility in Victorville, Calif. The company performed the tests under a $5 million bridge contract with the U.S. Defense Advanced Research Projects Agency (DARPA).
The A160T Hummingbird is 35 feet long with a 36-foot-diameter rotor and has reached speeds of up to 142 knots to date.
Publicado por Gustavo Lepez en 12/19/2008 02:44:00 p.m.