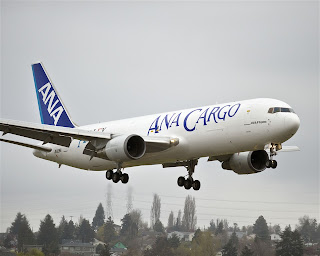 SEATTLE, April 11, 2008 -- Boeing [NYSE:BA] and ANA celebrated the inaugural flight of the first 767-300 Boeing Converted Freighter this week, as well as completion of the airplane's journey to Seattle on the airplane's second flight. The home city of Boeing Commercial Airplanes will be the base for the 767-300BCF's flight test and certification activities that will take place over the next few months.
After a first flight of just more than three hours April 9, the airplane departed for Seattle April 10, from the ST Aviation Services Co. (SASCO) facility at Paya Lebar airport in Singapore, where the conversion from a passenger jet to a freighter took place. The 50-tonne-capacity freighter flew nonstop to Seattle, completing the 14-hour, 51-minute flight at 10:13 a.m., the same day but 15 time zones away.
Boeing Flight Operations pilots stationed in Seattle will conduct the flight test program. Delivery and certification of the freighter are expected in June.
The airplane is painted in the livery of Japan-based ANA, the launch customer for the 767-300BCF, and the livery of ALLEX, a joint venture between ANA, Nippon Express and Kintestsu World Express.
Publicado por Gustavo Lepez en 4/12/2008 12:05:00 a.m.