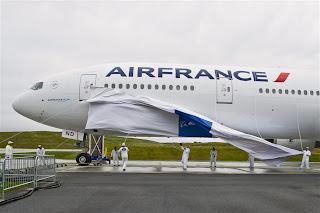 SEATTLE, April 10, 2009 -- Boeing [NYSE: BA] and longtime partner Air France celebrated significant milestones today with the delivery of the 777th Boeing 777 airplane. The new Boeing 777-300ER also will be the first to bear a new Air France livery and company brand identity.
The 777 family is the world's most successful twin-engine, twin-aisle airplane. Fifty-six customers around the world have ordered just over 1,100 777s. The 777's combination of unmatched payload and range, as well as the lowest fuel consumption and operating costs in its class, make it one of the most popular airplanes with passengers and airlines. Air France operates one of the largest fleets of 777s in the world and was the launch customer for both the 777-300ER and the 777 Freighter. "The 777 has been a valuable asset to the long-haul fleet of Air France and it is the right aircraft to allow us to maximize our revenues in the most economic and efficient manner," said Pierre Vellay, senior vice president, New Aircraft & Corporate Fleet Planning, Air France.
"It is a fitting tribute to the success of the program that an industry leader such as Air France is taking delivery of our 777th 777," said Aldo Basile vice president, Sales Europe, Russia and Central Asia for Boeing Commercial Airplanes. "The 777 continues to offer an unbeatable combination of efficiency, economics and passenger comfort that places it at the forefront of modern commercial aviation."
The relationship between Air France and Boeing goes back to the early days of the airline, which celebrated its 75th anniversary last year. Air France's early fleet of DC-3s sported the distinctive silver and royal blue livery that was used to launch the airline.
Three generations of Boeing airplanes have carried three Air France liveries. The first was with the arrival of the jet age and the Boeing 707. The second opened up long-haul international travel, epitomized by the Boeing 747 and finally, today with the unveiling of the Boeing 777-300ER. The latest incarnation of the distinctive Air France livery continues the all-white theme but is intended to position the company in the 21st century as a truly international carrier that has more than half of its passengers based outside France.
Publicado por Gustavo Lepez en 4/10/2009 08:09:00 p.m.