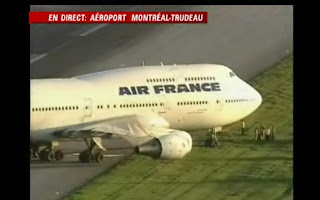 FOTO: mamireault / yulaviation.com (forum)
Air France jet skids off Montreal runway, no injuries reported
Christopher Maughan, Canwest News Service
Published: Tuesday, August 26, 2008
MONTREAL - Passengers on an Air France Boeing 747 Tuesday evening said they were a little shaken up but relieved no one was hurt after their plane skidded off the runway during a routine landing at Pierre Elliott Trudeau International Airport. “Everybody seemed to be OK, thankfully,” said Vanesca Soler, one of the 490 passengers on board. “But it was pretty scary - there was this burning smell and I was worried the plane was going to catch fire.”
Soler and others on the flight from Paris said the plane landed around 5:50 p.m. local time. As it slowed down to make a left turn in the direction of the arrivals terminal, it braked suddenly and without warning, skidding off into a grassy area. Stephanie Lepage, a spokeswoman for the airport, said there were no injuries as a result of the incident. “This was a very minor skid, so the plane didn’t travel very far,” she said. Emergency crews were called to the scene right away, but did not seem to be needed. “I didn’t see any smoke or fire,” passenger Philip Alvarez said. “There was just the smell of burning rubber.” Fellow travellers said firefighters boarded the plane and appeared to be testing for toxicity in the air. Some time later, the pilot explained via the public address system there might have been a mechanical problem with the brakes. Lepage said she couldn’t comment on the cause of the incident until the federal Transportation Safety Board concludes its investigation. Air France said in a statement it has started an investigation. After about an hour on the tarmac, passengers were shuttled to the airport in small groups. As they came through the gate at the arrivals terminal, many were still shaken. “I’m doing better now,” Eva Ribeira said. “At first I was really scared, because I work in Spain and there was just a huge crash there.” Other passengers said they were more frustrated by the wait to get off the plane than scared by the skid. “It was really long, especially with my young son wanting to get off,” Alvarez said.
FUENTE: ©Montreal Gazette 2008
aeropuertosarg.com.ar
airliners.net
Publicado por Gustavo Lepez en 8/27/2008 04:40:00 p.m.