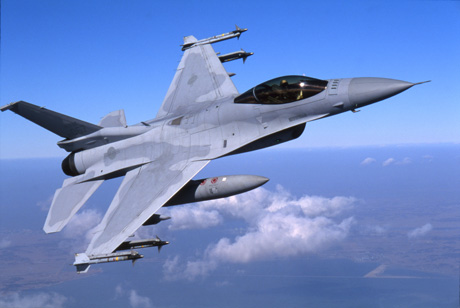 SINGAPORE, Feb. 15, 2012 – Lockheed Martin [NYSE: LMT] unveiled a new version of the F-16 today at the Singapore Airshow. The F-16V will feature enhancements including an active electronically scanned array (AESA) radar, an upgraded mission computer and architecture, and improvements to the cockpit – all capabilities identified by the U.S. Air Force and several international customers for future improvements.
With nearly 4,500 F-16s delivered, this is a natural step in the evolution of the world’s most successful 4th generation fighter. The Fighting Falcon program has continually evolved as it began with the F-16 A/B as the lightweight fighter then transitioned to F-16 C/D and Block 60 versions as customers’ requirements changed.
AESA radars offer significant operational capability improvements. Lockheed Martin has developed an innovative solution to affordably retrofit this key technology into existing F-16s. The F-16V configuration is an option for new production jets and elements of the upgrade are available to most earlier-model F-16s. The “V” designation is derived from Viper, the name fighter pilots have called the F-16 from its beginnings.
“We believe this F-16V will satisfy our customers’ emerging requirements and prepare them to better interoperate with the 5th generation fighters, the F-35 and F-22,” said George Standridge, Lockheed Martin Aeronautics’ vice president of business development.
The F-16 is the choice of 26 nations. The F-16 program has been characterized by unprecedented international cooperation among governments, air forces and aerospace industries.
Headquartered in Bethesda, Md., Lockheed Martin is a global security company that employs about 123,000 people worldwide and is principally engaged in the research, design, development, manufacture, integration and sustainment of advanced technology systems, products and services. The Corporation's net sales for 2011 were $46.5 billion.﻿
Publicado por Gustavo Lepez en 2/17/2012 08:44:00 a.m.