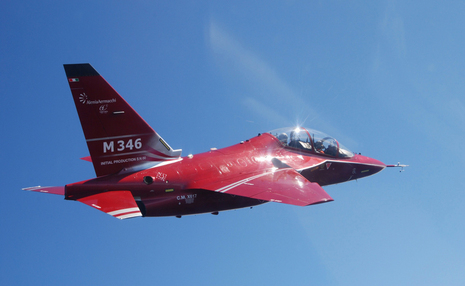 Venegono Superiore (VA) | The M-346 trainer aircraft of Alenia Aermacchi (a Finmeccanica company) has been selected by Israel’s Ministry of Defence to train its Air Force pilots.

Giuseppe Giordo, Alenia Aermacchi’s Chief Executive Officer and Responsible for Finmeccanica’s Aeronautics Sector, has commented: “We would like to thank the Israeli Ministry of Defence for their trust in and their choice of the M-346, a fact that confirms the product excellence, result of the skill and expertise of Alenia Aermacchi’s human resources”. The aircraft has just been delivered to the Italian Air Force and, in the short term, will also be in service with Singapore’s Air Force. “This new and important achievement - Giordo has added – represents the result of the synergic collaboration between the Italian Industry and Authorities and represents, as well, a big-value success for the Italian high-technology aeronautical industry and for the whole “Country System”’.

The M-346s, which will make the Israeli Air Force’ new trainers fleet, and will replace the TA-4 Sky-Hawks, currently operated by IAF (Israel Air Force), will be a total of about 30 aircraft.

The M-346 is the ideal platform for a latest-generation integrated training system. Its flexibility means that it can also be configured as an affordable advanced defence aircraft for operational roles. Thanks to its innovative technical characteristics, the aircraft also stands out on account of its high degree of safety and low acquisition and operating costs. The M-346 has been designed using the latest “design-to-cost” and “design-to-maintain” concepts, with an avionics system modelled on those used in new-generation fighter aircraft, such as Eurofighter, Gripen, Rafale, F-22 and the future JSF.

Following the contract, signed at the end of 2009, for the acquisition of a first batch of six M-346 aircraft and of the ground-based training system, the first two M-346s have been delivered to the Italian Air Force at the beginning of the year.

The M-346 also received its Military Type Qualification Certificate from the Ministry of Defence - National Armaments Directorate in June 2011, an essential requirement to certify the full corrispondence to aircraft specifications and to international military requirements. At the end of September 2010, the first international contract under the Fighter Wings Course (FWC) programme was signed with the Singapore government. The consortium, formed by ST Aerospace (prime contractor), Alenia Aermacchi and Boeing, was awarded the contract to supply 12 M-346 aircraft and ground-based training systems (GBTS). The first aircraft are scheduled to be delivered during this year.

Alenia Aermacchi also finalised contracts in June 2011 with ST Aerospace to provide logistics support to the fleet of M-346 aircraft purchased by the Republic of Singapore Air Force. In February 2009, the M-346 was selected by the United Arab Emirates under its tender for 48 new trainer aircraft, in both operational and training versions.

The M-346 is also an aircraft that complies, in its configuration, with all the characteristic indicated by the European Staff Target (EST) agreed by the AEJPT nations (Eurotraining).
Publicado por Gustavo Lepez en 2/20/2012 03:40:00 p.m.