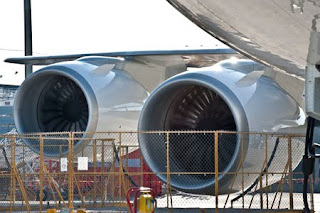 "We are very pleased with the engines' performance during this test," said Mo Yahyavi, vice president and general manager of the 747 program. "The engines and all the systems performed as expected."

Basic systems checks continued throughout the test. The engines were powered down and inspected and will be restarted following a technical review. The team completed a vibration check and monitored the shutdown logic to ensure it functioned as expected.

"This milestone is an exciting one for the GEnx-2B team and we anticipate the engines will continue the same high performance that we have experienced in our ground and flight tests," said Tom Brisken, general manager of the GEnx Program at GE Aviation.

The GEnx-2B engine is optimized for the 747-8. It helps provide customers with improved fuel efficiency, reductions in emissions and noise and a lower cost of ownership.
Publicado por Gustavo Lepez en 12/09/2009 09:57:00 p.m.