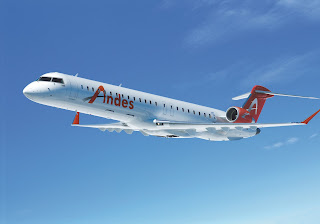 Bombardier Aerospace today welcomed Andes Líneas Aéreas of Salta, Argentina as another South American airline to select the Bombardier CRJ900 jetliner as the best aircraft to suit its requirements. The airline has leased two previously owned 90-seat CRJ900 aircraft to expand its fleet and reach out to new markets for both its scheduled and charter services.

With its new CRJ900 aircraft, Andes Líneas Aéreas will increase its services to include daily flights to Salta, Jujuy, Córdoba, Puerto Madryn and flights three times a week to Puerto Iguazú and Santa Cruz de la Sierra in Bolivia.

“The Bombardier CRJ900 jetliner will give us an aircraft for routes on which our larger aircraft can at times be uneconomical to operate,” said Hector Bonafert, President, Andes Líneas Aéreas. “The CRJ900 jetliner has excellent economics.”

About Bombardier
A world-leading manufacturer of innovative transportation solutions, from commercial aircraft and business jets to rail transportation equipment, systems and services, Bombardier Inc. is a global corporation headquartered in Canada. Its revenues for the fiscal year ended Jan. 31, 2009, were $19.7 billion US, and its shares are traded on the Toronto Stock Exchange (BBD). Bombardier is listed as an index component to the Dow Jones Sustainability World and North America indexes. News and information are available at http://www.bombardier.com/.
FUENTE:
http://www.simplementevolar.com/smf/index.php?topic=2738.msg65839;boardseen#new
Publicado por Gustavo Lepez en 12/20/2009 10:08:00 a.m.