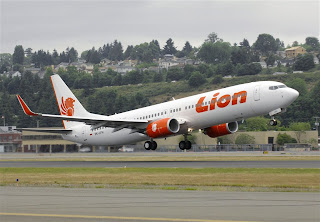 SINGAPORE, Feb. 19, 2008 -- The Boeing Company [NYSE: BA] and Jakarta-based Lion Air today announced an order for 56 Next-Generation 737-900ER (Extended Range) airplanes. This order, valued at more than $4.4 billion at current list prices, brings Lion Air's combined orders for the 737-900ER to 178. Additionally, the airline acquired purchase rights for an additional 50 737-900ERs.
Boeing Commercial Airplanes Vice President, Sales, Dinesh Keskar and Lion Air Founder and President Director Rusdi Kirana announced the order at the Singapore Air Show.
"The Next-Generation 737 is the right airplane for our airline, our customers and our growing route structure," Kirana said. "Lion Air is committed to growing its fleet with fuel-efficient, reliable and technologically advanced aircraft, while offering its passengers the best service and lowest fares in the market."
Boeing launched the 737-900ER program in July 2005 when Lion Air announced the initial order for 30 of the newest 737 model. All of Lion Air's airplanes will be equipped with performance-enhancing Blended Winglets, which improve fuel efficiency and reduce CO2 emissions by up to 4 percent.
"Lion Air, the world's largest operator of the 737-900ER, is leveraging the Next-Generation 737's unmatched economics, reliability and overall value to deliver superior service for its customers," Keskar said. "We look forward to growing our relationship with this most valued customer for many years to come."
The 737-900ER incorporates a new pair of exit doors and a flat rear-pressure bulkhead that allow a maximum capacity of 220 passengers in a single-class layout. Aerodynamic and structural design changes - including strengthened wings, a two-position tailskid, enhancements to the leading- and trailing-edge flap systems, optional Blended Winglets, and auxiliary fuel tanks - will allow the 737-900ER to accommodate higher takeoff weights and increase its range to 3,200 nautical miles (5,900 km).
The 737-900ER has substantial economic advantages over competing models, including 6 percent lower operating costs per trip and 4 percent lower operating costs per seat than its competitor -- which is more than 9,550 pounds (4,340 kg) heavier. The 737-900ER joins the 737-600, -700, -700ER and -800 airplanes and will share the same industry-leading reliability of the other Next-Generation 737 series models.
To date, eight customers have placed orders for 227 Next-Generation 737-900ERs. The 737 is the best-selling commercial jetliner in history, with more than 7,700 orders from more than 245 customers around the world. Boeing has more than 2,000 unfilled orders for the airplane with a value exceeding $145 billion at current list prices.
Lion Air received the first 737-900ER in April 2007 when the airplane was delivered in a special dual paint scheme that combined the Lion Air lion on the vertical stabilizer and the Boeing livery colors on the fuselage. The airline has received a total of nine 737-900ERs to date. Lion Air operates an all-Boeing fleet and is the largest low-fare airline in Asia, with traffic approaching 1 million passengers per month since the airline began operations in June 2000.
Publicado por Gustavo Lepez en 2/20/2008 02:21:00 p.m.