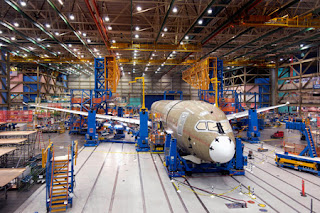 EVERETT, Wash., Feb. 15, 2008 -- Final assembly started today on the second flight-test airplane for the all-new Boeing [NYSE: BA] 787 Dreamliner.
Loaded snugly into the first position of the 787 production system, workers in the Everett, Wash.-based factory can now begin joining together the fuselage sections and wings. All major joins take place in this position. While this is the second of six flight-test airplanes, this Dreamliner is actually the fourth on the production line. It follows the two airplanes that will be used for static and fatigue testing.
"We've received significantly less 'traveled work' on this airplane," said Steve Westby, vice president of 787 Final Assembly and Change Incorporation. "The degree of completeness of sections at the partners is significantly better than Airplane #1. Condition of assembly is much better and we will see continued improvements on the condition of each assembly shipped. All this helps to bring us back into alignment with the original design of our production system."
Production is going well on subsequent airplanes, too. Currently 21 airplanes are in various stages of production. This number includes the static and fatigue airplanes, which will not be delivered to customers. Since its launch in April 2004, the 787 Dreamliner has amassed 857 firm orders valued at $144 billion from 56 airlines.
Publicado por Gustavo Lepez en 2/15/2008 11:18:00 p.m.