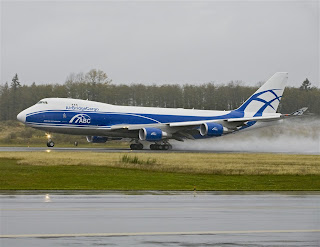 EVERETT, Wash., Nov. 16, 2007 -- Boeing [NYSE: BA] today delivered the first Boeing 747-400 Freighter to enter the fleet of AirBridgeCargo, a subsidiary of Volga-Dnepr Group, under lease from GE Commercial Aviation Services (GECAS).
The new airplane is the sixth 747 freighter in the AirBridge fleet, joining five 747-200/-300 Freighters. It is also the first of two 747-400 Freighters that AirBridgeCargo will lease from GE Commercial Aviation Services, and the carrier will take an additional 747-400F on lease in the second quarter of 2008. The Volga-Dnepr Group has also ordered five of Boeing's new 747-8 Freighters, the highly efficient and more capable next model in the 747 freighter family.
GECAS has another 747-400F delivery in early 2008; which also will be leased to AirBridgeCargo.
The new airplane will be used on AirBridgeCargo's routes worldwide. AirBridgeCargo's new Boeing 747-400 Freighter is powered by General Electric CF6-80C2 engines.
"The Boeing 747-400 Freighter is the world's leading cargo airplane and will bring new efficiencies to AirBridgeCargo," said Gennady Pivovarov, senior vice president of Production, AirBridgeCargo. "The 747-400 Freighter will allow us to provide superior service to our customers, while reducing operating costs and increasing reliability and profitability. It will help us to open new routes and explore business opportunities in new markets, in particular North America."
The most recent Boeing World Air Cargo Forecast projects that the cargo market between the Commonwealth of Independent States and Europe will grow at an overall average annual rate of 5.7 percent during the 2005 - 2025 forecast period.
"This is a milestone for Boeing to deliver our first new 747-400 Freighter to Russia," said Craig Jones, vice president of Sales for Russia and Central Asia, Boeing Commercial Airplanes. "AirBridgeCargo Airlines clearly sees the reliability, efficiency and value of the industry standard 747-400 Freighter in today's cargo market."
The 747-400 Freighter is the largest commercial cargo transport in service, with the lowest tonne-kilometer cost in the industry. The 747-400 Freighter can carry 113 tonnes (113,000 kg) of cargo up to 8,240 kilometers (4,450 nautical miles).
In all its versions, the worldwide fleet of 747 Freighters -- nearly 300 in all -- provides more than half the world's dedicated freighter capacity. The 747 Freighter is a key element in the development of air cargo into today's $52 billion industry.
###
Publicado por Gustavo Lepez en 11/19/2007 02:44:00 a.m.