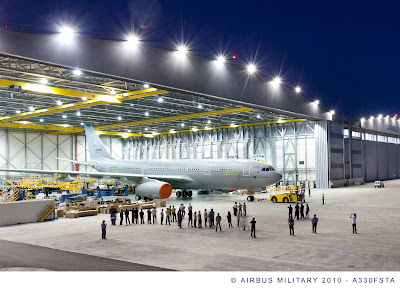 The first A330 MRTT Future Strategic Tanker Aircraft (FSTA) for the Royal Air Force has completed the in-door trials, such as systems trials, required prior to First Flight and has been rolled out of its hangar at Airbus Military’s Getafe, Madrid facility to continue with the out-doortrials, such as fuel trials and others. Once all trials are successfully completed, the aircraft will be handed over to the Flight Test Team for First Flight which is due in the first part of September. The aircraft has been converted from a basic A330-200 airframe by Airbus Military.
Following the flight-test programme it will be delivered late next year to the Air Tanker consortium responsible for operating the aircraft on behalf of the Royal Air Force